Storage is the cornerstone of big data, and the Metadata of storage system is its core brain. The performance of Metadata is very important to the performance and expansion of the whole big data platform. We chose HDFS, OSS and JuiceFS to do metadata performance measurements together.

HDFS is a widely used big data storage system, which has been deposited and accumulated for more than ten years, and is the most suitable reference frame.

JuiceFS is a new player in the big data community, built specifically for big data in the cloud. It is a big data storage solution that conforms to the native features of the cloud. JuiceFS uses cloud-based object storage to store customer data content, and uses the JuiceFS metadata service and Java SDK to achieve full compatibility with HDFS, giving the same experience as HDFS without any changes to the data analysis component.

Hadoop has a tool called NNBench that specifically measures the Metadata performance of a file system, and we used it to do this.

The original NNBench has some limitations, and we\'ve made some adjustments:

We used three Aliyun 4 core 16 GB virtual machines for the stress test. CDH 5 is a widely used Hadoop distribution, and we chose it as our test environment, with HDFS version 2.6. HDFS is a highly available configuration that uses three JournalNodes, and JuiceFS is a Raft group of three nodes. HDFS uses intranet IP, JuiceFS uses elastic IP, HDFS network performance will be better. OSS is accessed using an intranet interface.

Let\'s start with the performance of HDFS:

Consider the performance of OSS: 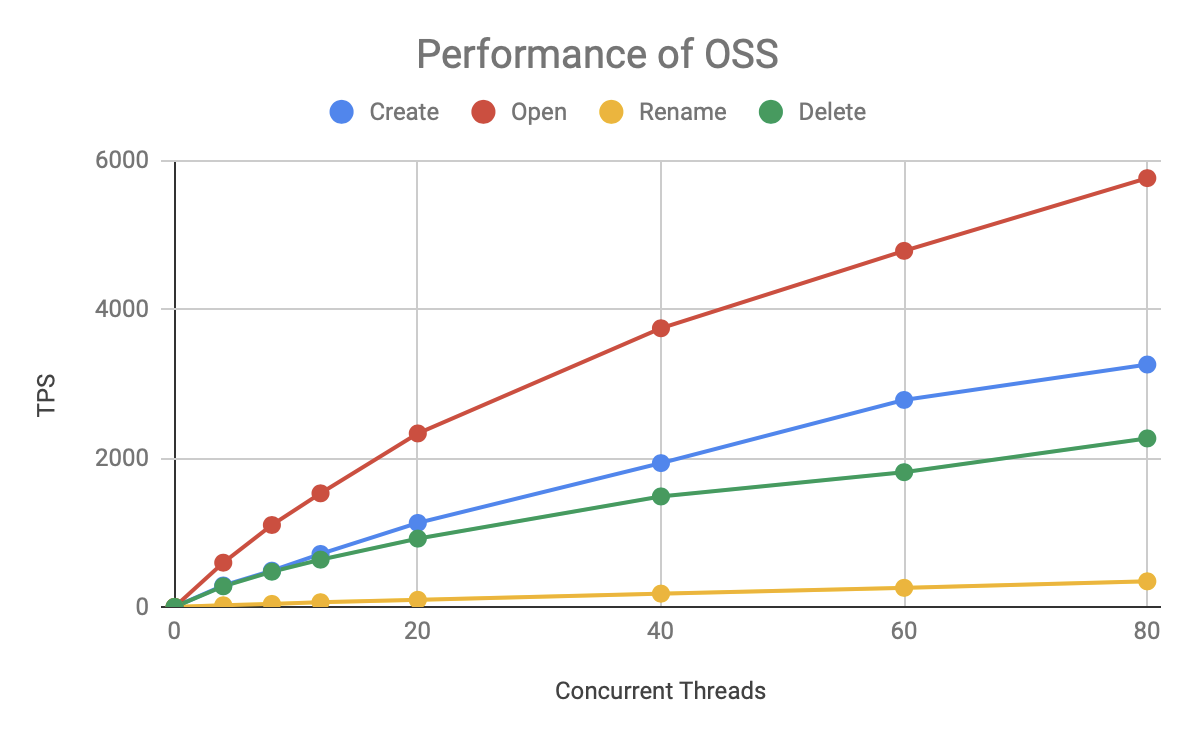 OSS is an order of magnitude slower than HDFS, but the speed of its various operations remains stable, and the total TPS increases with the number of concurrency, with no bottleneck under 80 concurrency. Due to the limitation of test resource, we can not know its upper limit by further pressure test.

Finally, take a look at JuiceFS\'performance: 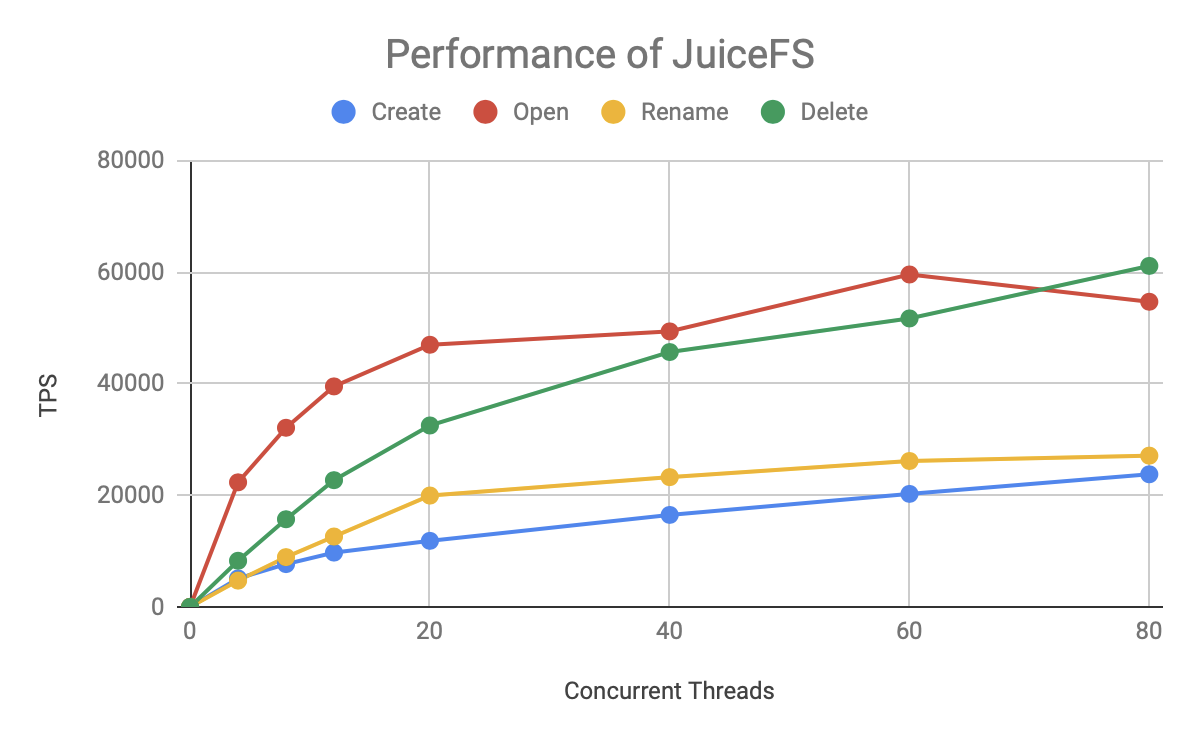 As you can see in figure, the overall trend is similar to HDFS, with Open / Read and Delete operations significantly faster than Create / Rename. The TPS of JuiceFS also kept thread growth basically within 20 concurrency, then slowed down and reached the peak at about 60 concurrency.

But the JuiceFS grew faster, with a higher ceiling.

To get a better sense of the performance differences between the three, let\'s put HDFS, Aliyun OSS, and JuiceFS together: 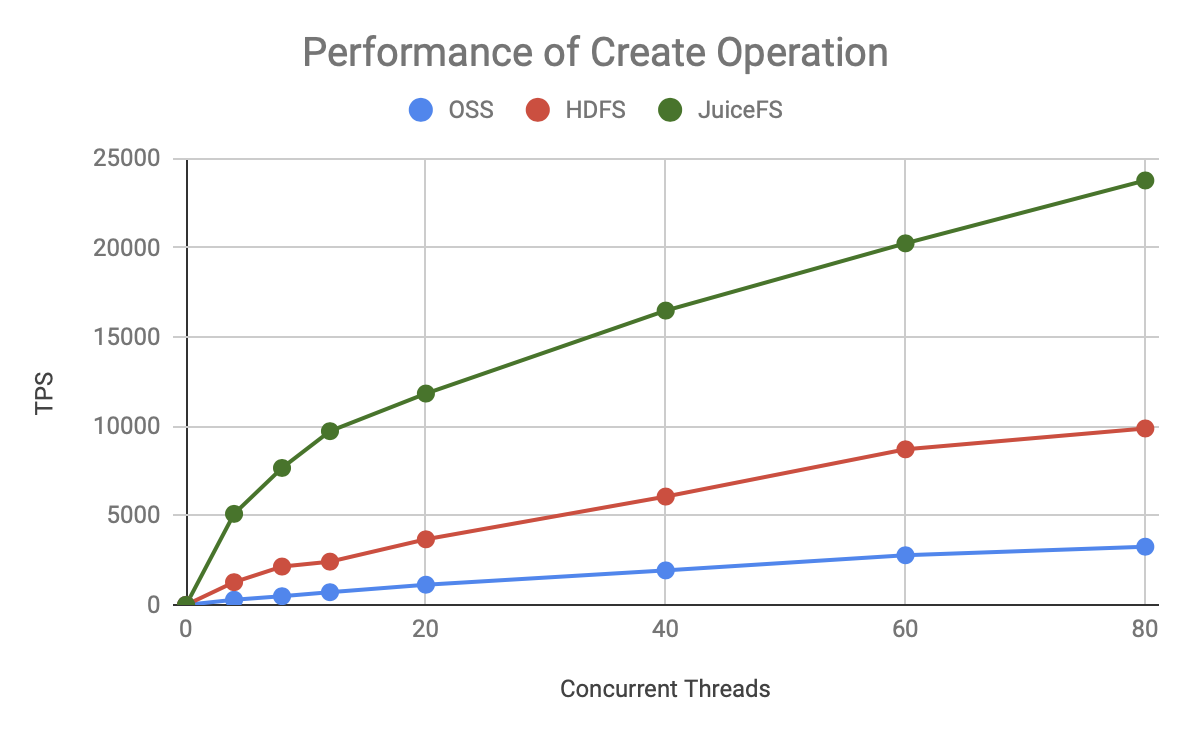 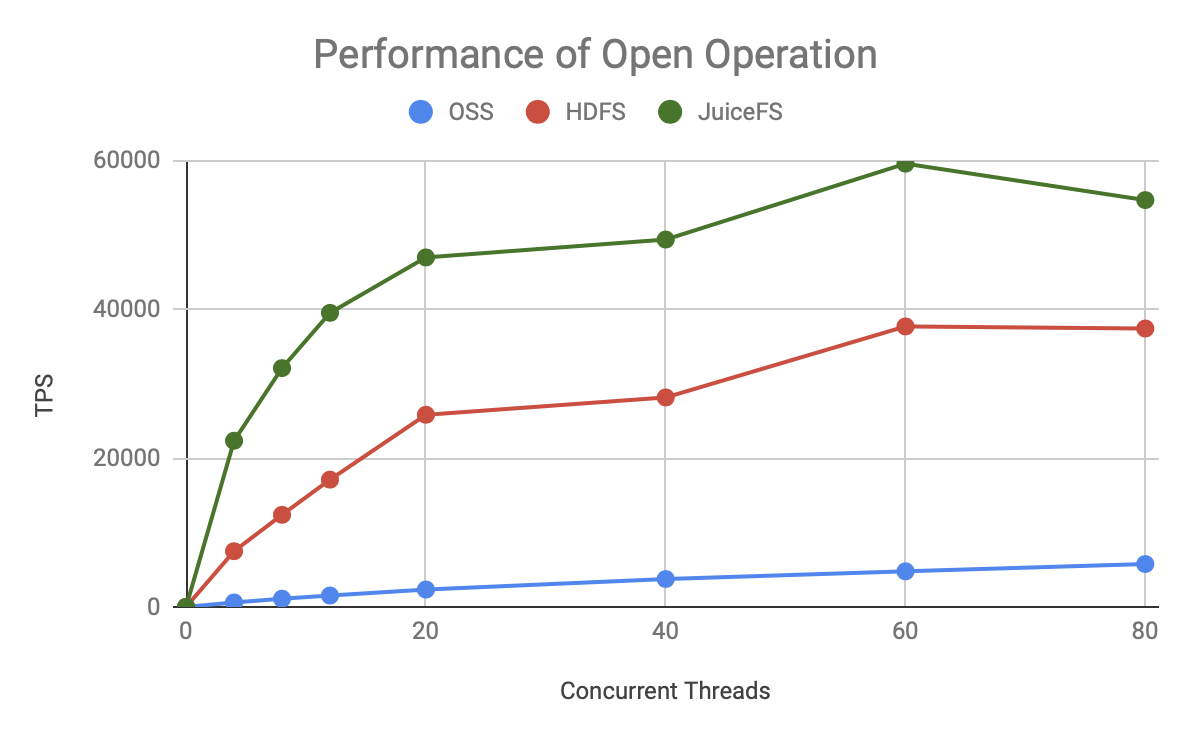 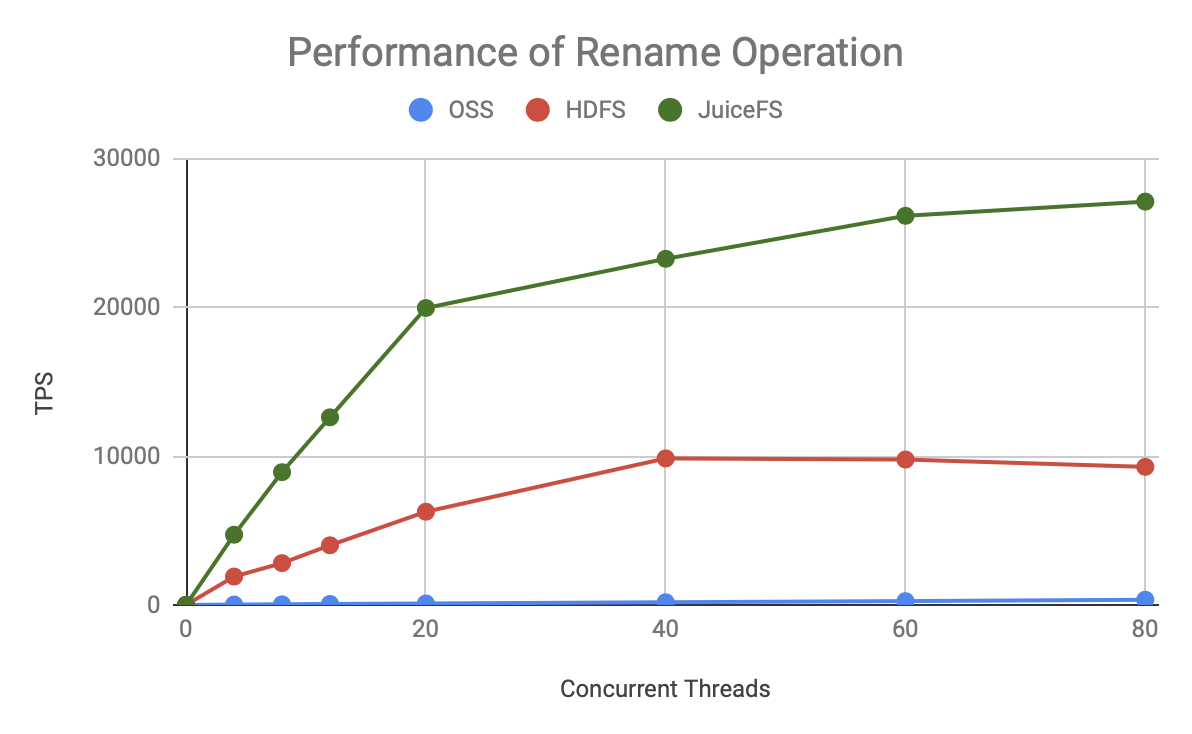 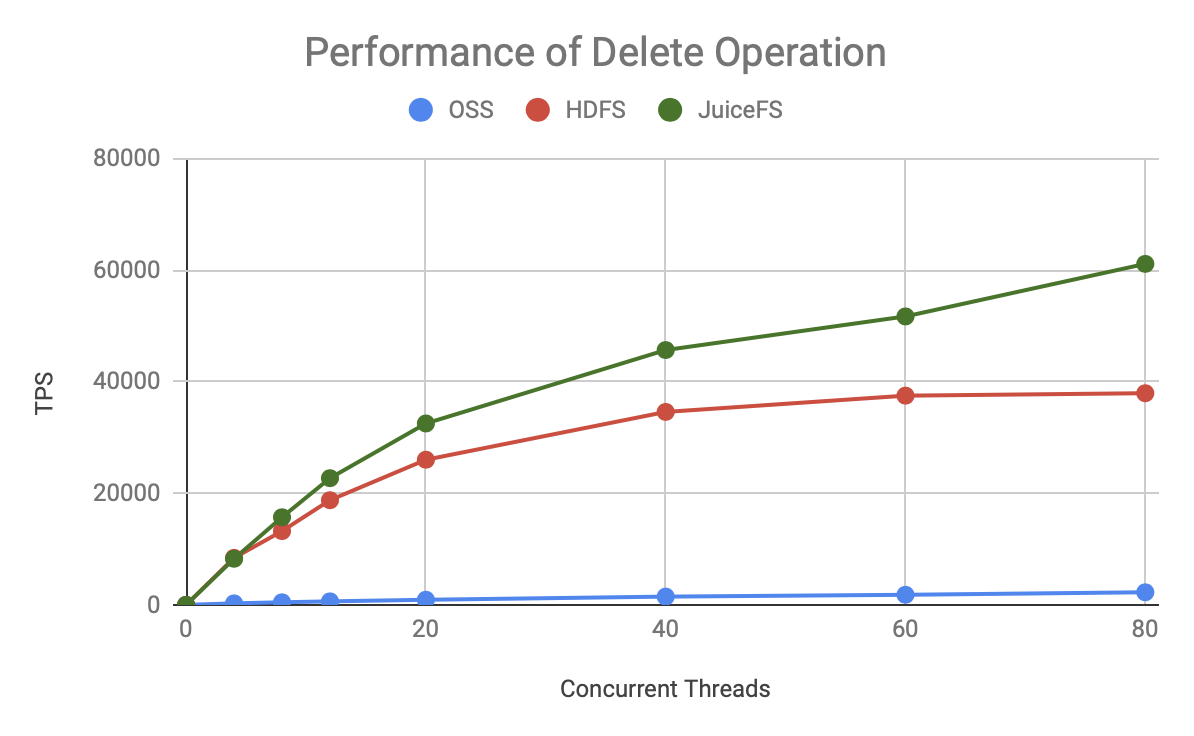 Thus, regardless of the metadata operation, the TPS of JuiceFS grows faster and has a higher upper bound than HDFS and OSS.

In general, when we look at the performance of a system, we focus on its operation delay (time consumed by a single operation) and throughput (processing capacity at full load) : 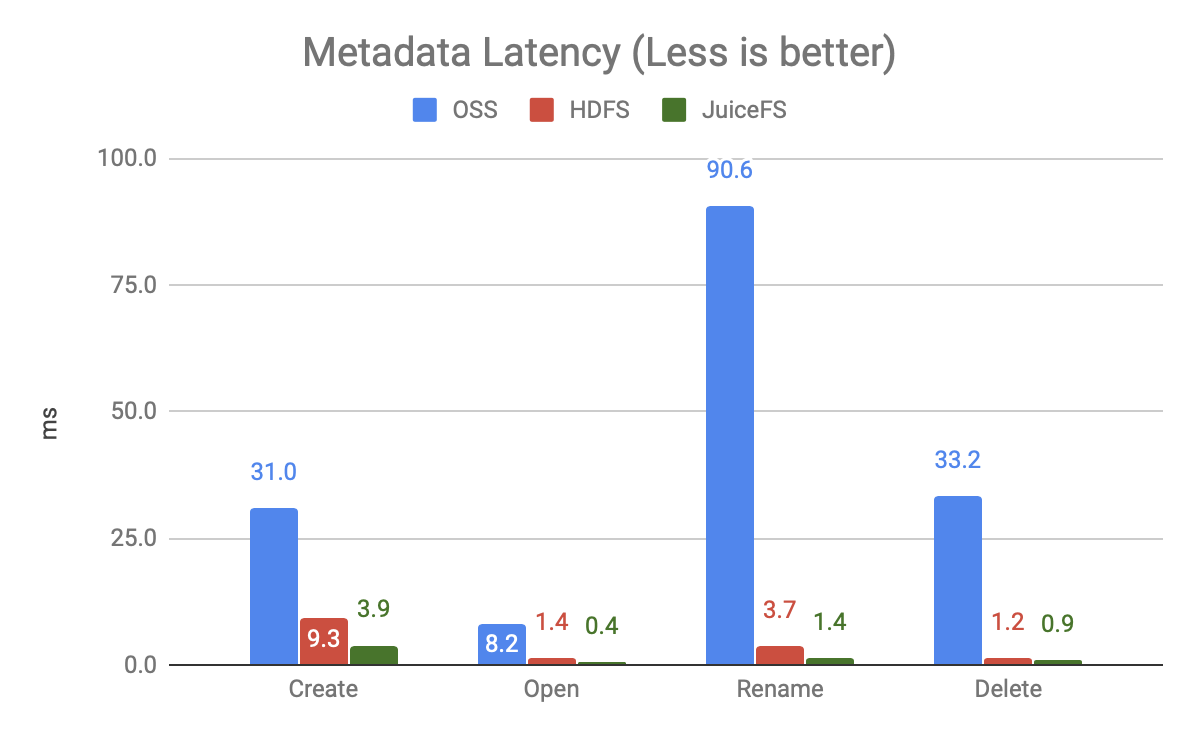 The graph above shows the delay of each of the 20 concurrent operations (not fully loaded) , and you can see: 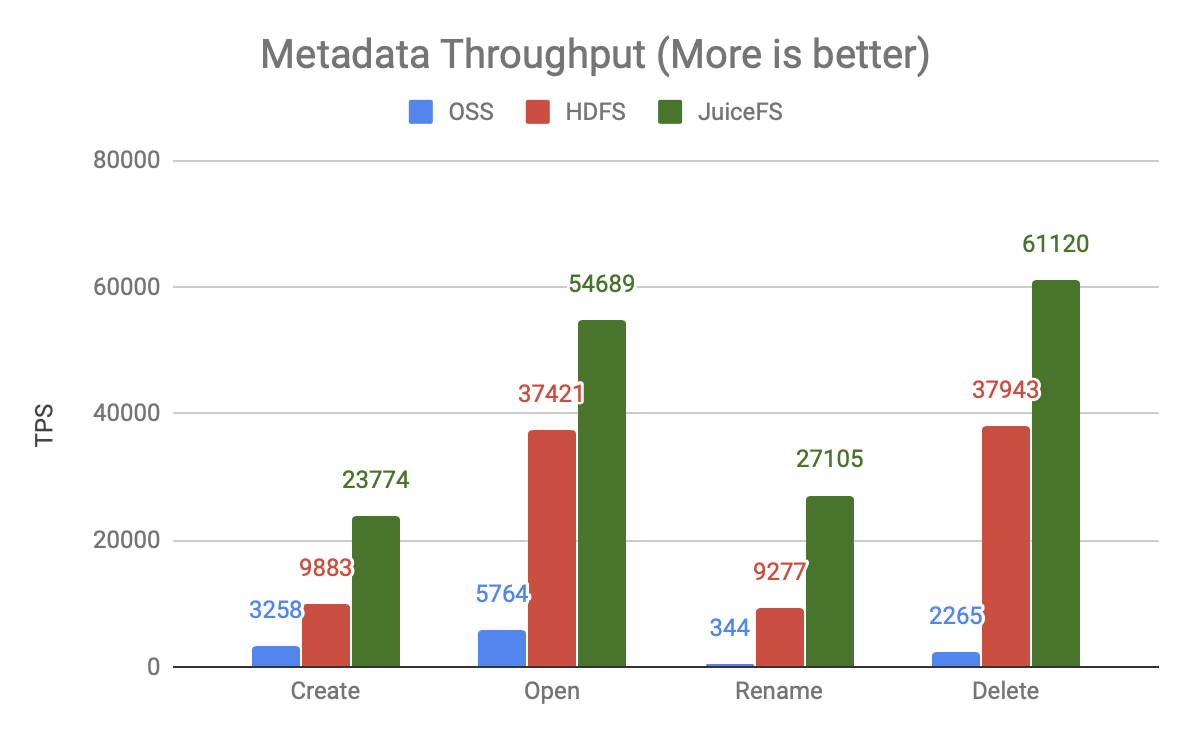 The graph above shows the throughput at 80 concurrent times and shows:

From the above two core performance indicators, object storage is not suitable for the performance requirements of the big data analysis scenario. JuiceFS as a latecomer has comprehensively surpassed HDFS, with faster performance to support larger-scale computing processing.