Running JuiceFS generally involves the network connection between database and object storage, which is determined by the architecture of JuiceFS. As long as the servers support encryption connections, JuiceFS can be accessed through the encrypted channel.

Connect to objetc storage via HTTPS​

Public cloud object storage generally supports both HTTP and HTTPS. If no scheme is specified, JuiceFS uses HTTPS by default. For example, the client will identify the bucket in following command as https://myjfs.s3.ap-southeast-1.amazonaws.com.

In the case where server and object storage run on the same VPC network, explicitly set the URL scheme to http if you don't need an encrypted connection, e.g., --bucket http://myjfs.s3.ap-southeast-1.amazonaws.com.

Connect to database via TLS/SSL​

JuiceFS encrypts data during transmission over the network to prevent unauthorized users from eavesdropping on network traffic.

JuiceFS clients always use HTTPS to upload data to the Object Storage Service, except for the following cases.

JuiceFS supports Data Encryption At Rest. All data will be encrypted first before being uploaded to object storage. This allows JuiceFS to effectively prevent data leakage.

Data Encryption At Rest of JuiceFS adopts industry-standard encryption methods (AES-GCM and RSA). User only needs to provide a private key with a password while creating the file system, and the private key can be provided by setting the environment variable JFS_RSA_PASSPHRASE. For use, mount point is totally transparent to the client, i.e., access to file system will not be affected by encryption and decryption processes.

The cached data on the client-side is NOT encrypted. Only the root user or owner can access this data. To encrypt the cached data, you can put the cached directory in an encrypted file system or block storage. 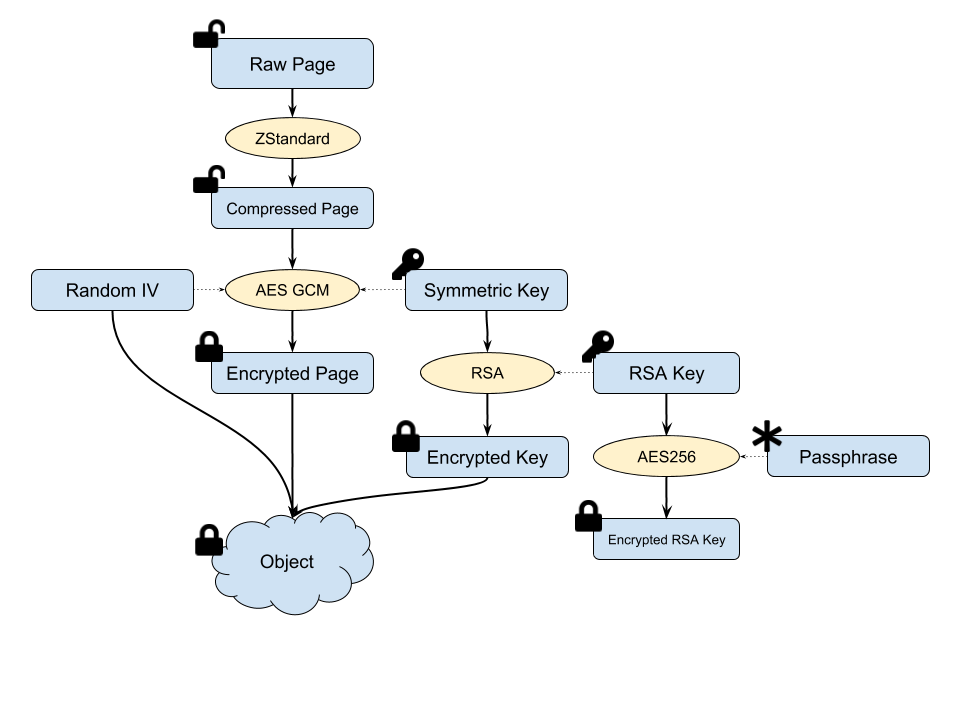 The detailed process of data encryption is as follows:

The steps for decrypting the data are as follows:

There are following steps to enable Data Encryption At Rest:

The RSA private key, usually manually generated by OpenSSL, plays a crtical role in Data Encryption At Rest. The following command generates a 2048-bit RSA private key with a file name of my-priv-key.pem in the currect directory using aes256 algorithm.

The security of RSA private key is crucial when Data Encryption At Rest encryption is enabled. The leak of the key will put the data into a serious security risk. If the key is lost, all the encrypted data will be lost and cannot be recovered!

There is no need to specify extra options while mounting an encrypted file system. However, the passphrase of the private key needs to be set before mounting using environment variable.

When creating a new volume using juicefs format, static encryption can be enabled by specifying the RSA private key with the -encrypt-rsa-key parameter, which will be saved on the Metadata service. When the private key is password-protected, the password must be specified using the environment variable JFS_RSA_PASSPHRASE.

NOTE: If the private key is password-protected, an environment variable JFS_RSA_PASSPHRASE should be exported first before executing juicefs mount.